BREAKING: In 1 Hour the audio version of Tomlinson vs Nadolski will premiere

‎
Whenever I see him trying to play victim it disgusts and angers me in equal measure. After all the online bravado and the whole tough guy schtick he's been whittled down to what he really is, a fat fucking pussy. "He threatened to come fight and hurt me" boo hoo, faggot. You invited this shit into your life and I'm so glad the judge saw right through you. Die fat about it. 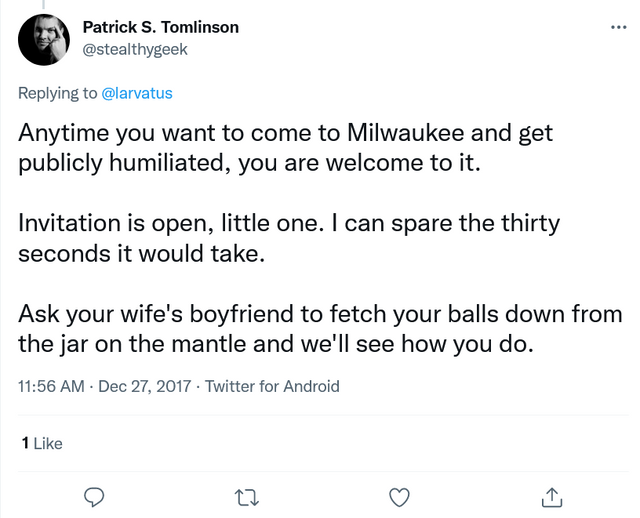 Reminder: those tweets are well before he flew into OnA's radar. He's been a fat cunt for quite some time.
C

FurBurger said:
That arguing with the judge one is incredible. The judge says something, Pat argues he's wrong - without evidence, just nuh-uh. The judge cites Pat's own words, and Pat tries to argue... what, exactly? That he can say what he likes with impunity? So the judge raises his voice to make a point - always a good sign - and Pat just rolls his eyes and sighs.

Pat is so incredibly lucky that the judge gave him the leeway a decent man would give a retard, despite his snotty attitude.
Click to expand...

What a worthless pathetic faggot. Who acts like this? Get a job, you weird faggot.

I am the crispy white spot in your soul 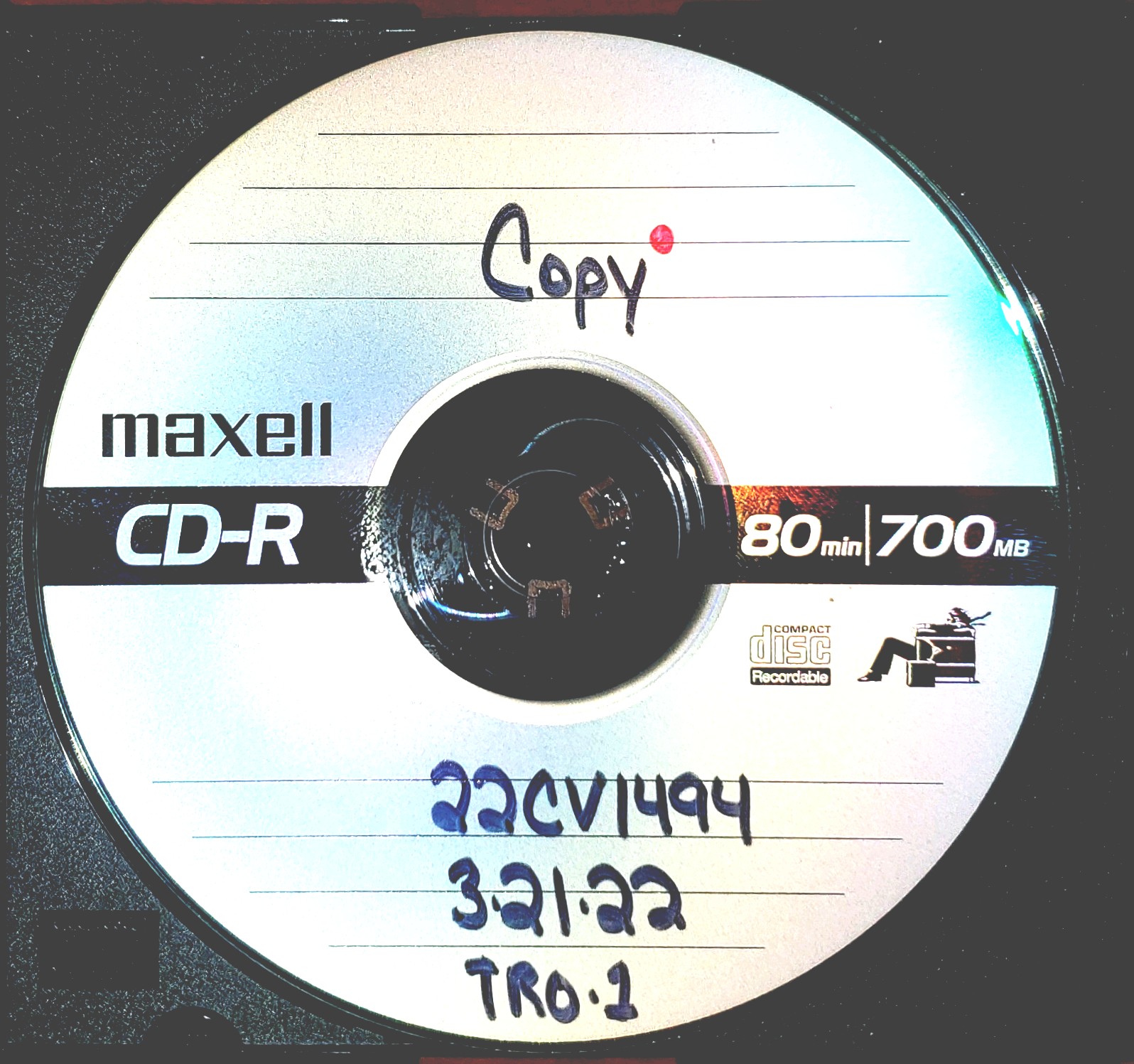 You're not gonna wanna miss this shit
Click to expand...

Thank you Brian! This is better than expected. He really sounds like a bitter old queen. The argument with the judge is hilarious
T

‎
I’m late to this, but he has a cunty tone from the very beginning, and that always goes well in court. By the end he is revving up to “baby, child” the judge before it gets dismissed.

‎
The payoff at the end was worth the wait. "ThaT did noT occur, judge child!" What a maniac.

Thank you for your service, Brian. I'll be looking forward to your next Bill Burr style rant.

‎
The difference between being a regular guy and a nerd weirdo is really all that matters in life. Unless you’re the .01% of autists like Musk that are genius enough to make it big off of smarts, it doesnt matter how smart you are. If you are naturally a nerd loser you will suck at life.
Andrew is no beacon of success. I think he’s a truck driver. But you can tell he got invited to the kegger in high school and had friends. He knows how the world works and how to behave. Patrick was the outcast loser and no matter what pseudo-intellectual verbage he wants to use, life will always give him an unending series of swirlies, just like Preston used to give him between history and gym.

‎
Hearing this all outside of just seeing the transcript is so much better. Nervous Nelly Tomlinson stumbling on his words, the judge telling him to effectively ‘hush child’ is great.

The pronunciation of the T’s is infuriating. I have a Wisconsin/Milwaukee accent which gets me mocked now living far away. I’ve never heard anyone from up there talk like that. As others have said, this must be some learned habit to make himself sound more intelligent than the fat retard he really is.

What annoys me more is how he openly talks bout how ‘violence is a quick visit’ and all the other bullshit tough guy bravado he tries to pull. You needed a fucking protective order you got so scared of BDA. You are anything but an actual tough guy. All he is a self proclaimed victim, and if he had half a bit of sense to him, he’d get off the Internet for awhile.

Patrick, you lose again. You won’t ever see that 140 or whatever the fuck it is in court fees- while a trivial amount to the average brotherman, that’s like 3 months of Book royalties. Also your wife is a fridge bodied cunt, your mother is a piece of shit, father a faggot, and brother a penny eating retard. Sue me, fat fake tough guy.

‎
I'd just like to remind @ChicopeeChip that this all-steak, no-sizzle approach is how you should executive produce.
G

FurBurger said:
I'd just like to remind @ChicopeeChip that this all-steak, no-sizzle approach is how you should executive produce.
Click to expand...

For the record, Brian and I spoke behind the scenes about releasing it simultaneously on the board and podcast. There's nothing wrong with sizzle AND steak.

ChicopeeChip said:
For the record, Brian and I spoke behind the scenes about releasing it simultaneously on the board and podcast. There's nothing wrong with sizzle AND steak.
Click to expand...

I don't have breaststroke

So why aren't you doing comedy gigs, now child? Since the book deals died a long time ago and the only deadline you have coming up is on your hearts ability to pump blood comprised mostly of saturated fat?

FurBurger said:
There's a point about 14 minutes in where he bitches at the judge that he hasn't been told exactly what to do. "I am an adult child your honor, I must be given simple instructions to get through life. I regularly order people through twitter to do their own research to discover how correcT I am; but that doesn't mean I should do my own research"


Yeah, that life-long atheism fell to shit in about a second, didn't it?

Oh, and @ThatRetardWhoDoxxdHimself; nobody likes the sound of their own voice; but you were standing next to a man who makes you sound like whoever bullied Sam Elliot in highschool.
Click to expand...

Timber said:
It's worse than that. He Tomlinson'd the petition by opening it with statements like "3 and a half years ago I became the target of harassment [...] This has been going on for 3 and a half years" even though on Twitter he immediately said BDA is new blood. 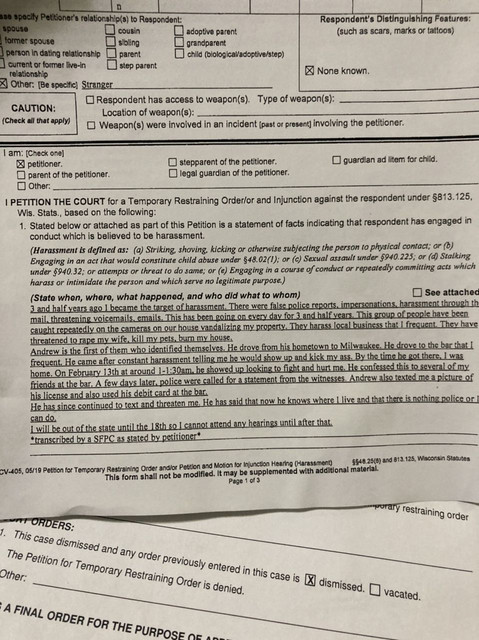 Of course the Court took him seriously and asked him to confirm: 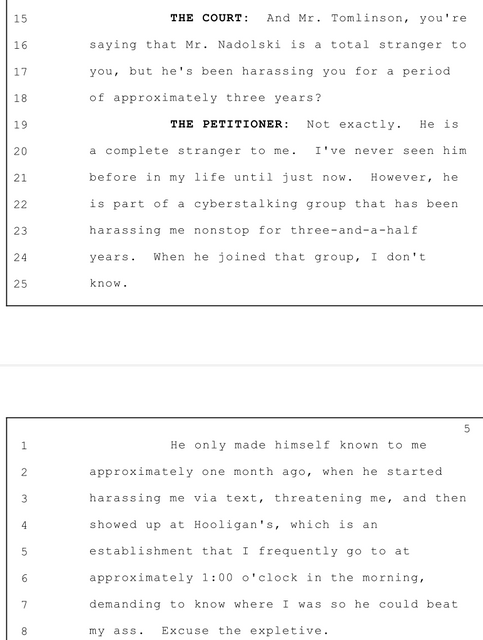 I'm pretty sure he already lost the Judge at page 4 in the transcript.
Click to expand...

“He has since continued to text me …”

She would have blown me in 2 seconds

‎
You just know he practiced that "because I'm not 25 and don't close out bars anymore" line in the mirror the night before. Drunk of course. In his fat head he imagined the judge giving him a knowing smirk like "Yeah, I am also a mature and serious man who doesn't do things like that." But because Fat is severely autistic, immensely unlikeable and very, very fat his "winning" line came out rehearsed, condescending and hateable-sounding. You can hear the air suck out of the room as soon as he says it. You can almost hear the commissioner thinking "why did he say that? Is he a cunt. I think he's a cunt." I can't think of a worse first impression Fat could have given, short of just taking a shit on the floor.

‎
I’d love to know what the judge is thinking when he hears Pat continue to use the term felony and Pat declaring activities as such.

I mean there’s hours of negotiations between DAs and defense attorneys over charges being a felony v. misdemeanor and cases can hinge on the difference and this fat sack throws it out there so casually that he is able to make that call.

It’s either significant delusion or a complete lack of grasp of the law.

PlayfulScamp said:
I’d love to know what the judge is thinking when he hears Pat continue to use the term felony and Pat declaring activities as such.

I mean there’s hours of negotiations between DAs and defense attorneys over charges being a felony v. misdemeanor and cases can hinge on the difference and this fat sack throws it out there so casually that he is able to make that call.

It’s either significant delusion or a complete lack of grasp of the law.
Click to expand...

Dude rocked up to court asking for a TRO, and assuming that he didn't have to present any evidence; that the word of Some Pig would be enough for the judge to grant him whatever he wishes.

Yes, I'm aware that this doesn't answer your "ignorance or complete delusion" question.
You must log in or register to reply here.
Top